The Conference on the Future of Europe, UE 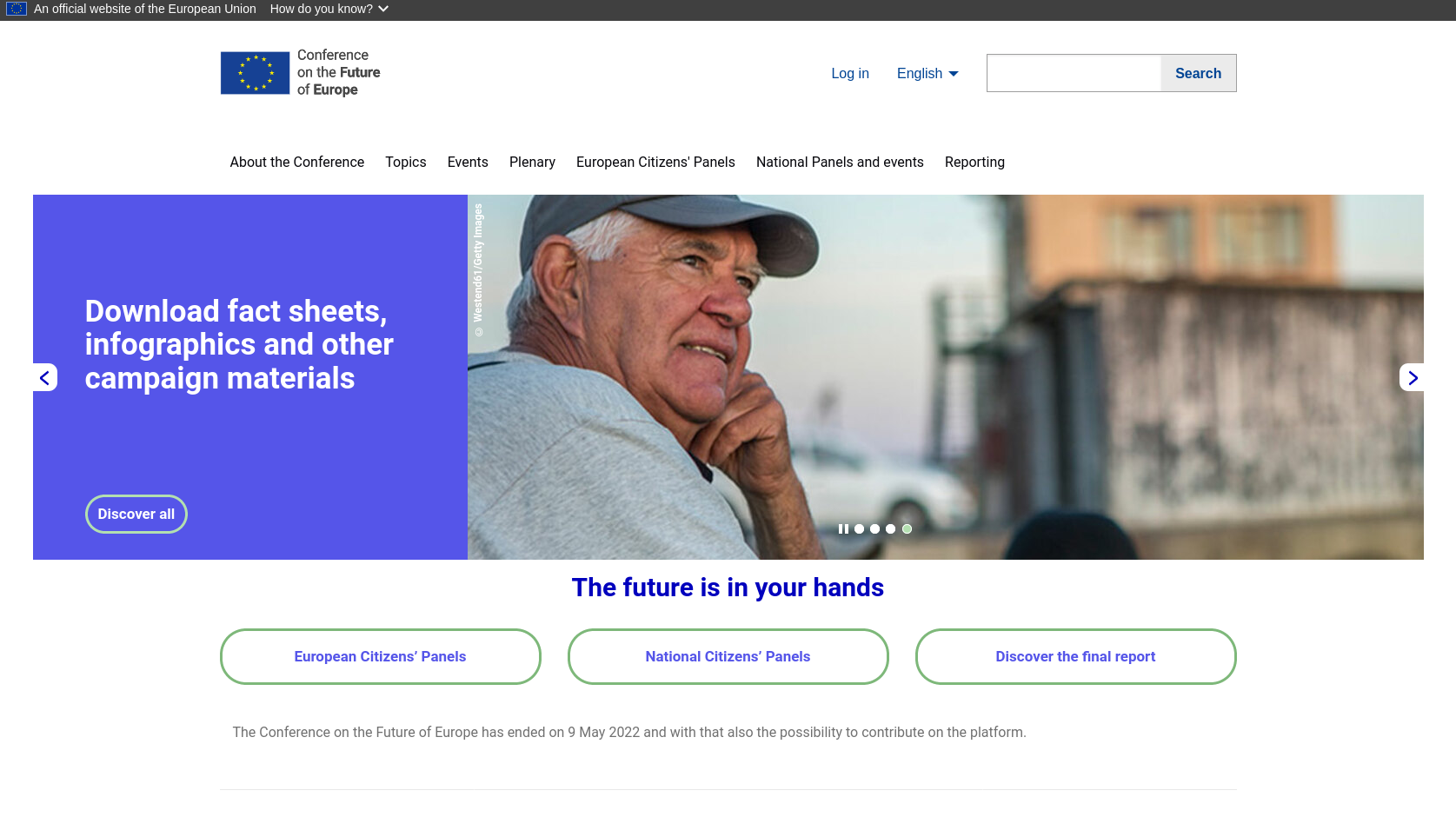 The European Commission used Decidim to implement the multilingual digital platform of the Conference on the Future of Europe.

The Conference on the Future of Europe was a pan-European initiative composed of multiple interlinked events and debates where citizens, civil society and all other stakeholders (including local, regional and national authorities) from Europe were able to share and discuss their ideas, in all official EU languages, on what they expect from the European Union. It provided a unique opportunity for EU Institutions to directly hear from citizens on Europe’s challenges and priorities. While based on a Commission proposal, the Conference was a joint EU initiative, piloted by the European Parliament, the Council and the Commission.

The multilingual digital platform functioned both as the Conference (i) main information hub, providing relevant information to citizens about the conference format, topics under discussion, planned events, and outcomes, and (ii) main participation space, enabling citizens to contribute online, individually or collectively, with concrete ideas for EU policies around the Conference's headline topics defined in the Joint Declaration, and to comment on other people’s ideas. Another important way of contributing to the Conference was to organise events (virtual, in-person or hybrid), announce them on the platform, report on their outcome and link them to ideas.

The digital platform was launched on 19 April 2021 and was open to contributions until 9 of May 2022. During this period, 18 859 ideas and 22 167 comments were submitted and 6 661 events were organised. Contributions gathered through the digital platform were taken on board by the European Citizens’ Panels and debated and discussed in the Conference Plenary - the the Conference’s other two main pillars.

This one-year journey of discussion, debate and collaboration between citizens and politicians culminated in a report centred around 49 proposals that include concrete objectives and more than 320 measures for the EU institutions to follow up.

Why did you choose Decidim?

Overall, Decidim offered a wide range of modules for participatory activities (e.g. initiatives, consultations, assembly management, participatory budgeting etc.). These modules could be customised and combined to tailor the overall engagement process of the Conference, complementing or facilitating also the planned face-to-face engagement activities. Moreover, as Decidim is open-source, the platform could be easily hosted on the European Commission servers (Europa) and could be moderated by the Commission. The deployment of an "in-house" platform was key to the Conference since data ownership, transparency and traceability were crucial aspects, as in any democratic process. Deploying an open source solution also meant that the source code was available and all actions were accountable. The multilingual capabilities of Decidim were also fundamental as it provided the initial ground for the setup of a genuine pan-European online debate.

What were you looking for when deploying a Decidim

The European Commission was interested in having a digital platform that:

What did you learn from this experience?

The Conference on the Future of Europe was a pioneering participatory event at the European level in terms of scale, interactivity and multilingualism. The COVID-19 pandemic impacted the initial planning of the Conference, highlighting the importance of a digital platform as a way to provide alternatives to face-to-face events. In this way, the digital platform was key in increasing the opportunities for citizens to play their part and be involved in EU policy making. The multilingualism aspect was crucial to ensure that there were no language barriers to participate - participants could submit their ideas and comment in their own language as well as read other participants contributions in any EU language.

Throughout the entire process, in order to give voice to wider publics and improve the participants' experience, the platform was continuously improved, for example by adding functionalities or visual materials. The platform was also made more accessible to people with disabilities.

It was also important in the process to show participants that their contributions mattered. Frequent reports were produced based on the analysis of the contributions submitted to the digital platform.